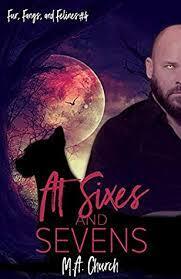 Werecats mating with humans was bad enough…. But an Alpha werewolf?

Aidric’s life takes an unexpected turn when he meets Alpha Carter Lovelock of the Dark Lake Pack—who is apparently his mate. Now Aidric must decide whether to accept the mate the goddess chose, or deny her gift because cats and dogs just don’t mix.

Carter is in a pickle. He always assumed his mate would be a female werewolf. How else is Carter supposed to carry on his line and retain Alphaship? When Aidric comes into his life, Carter’s ex, Sabrina, isn’t giving up easily. Her brother, Delaney, is a thorn in Carter’s side, and some of the other werewolves go out of their way to make Aidric feel unwelcome, including one of his deltas, Evan.

Unfortunately, what little headway they make is destroyed during a full moon hunt when enemy werewolves attack Aidric and threaten the pack house where the Dark Lake pups are kept—an ambush that could have devastating consequences on their future.

Werewolves are notoriously insular, and before Carter and Aidric can build the life they want with each other, they’ll face a fight for acceptance.